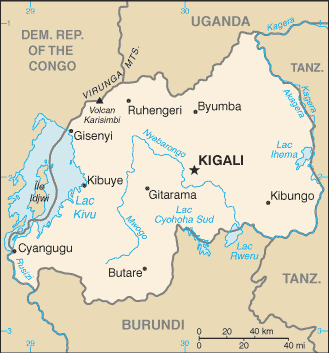 Leaving Entebbe airport in Uganda behind us, the seemingly never-ending vastness of Lake Victoria below, our destination was a small African country, Rwanda. Tucked just south of Uganda, west of Tanzania, north of Burundi and east of Zaire, this beautiful green land of a thousand hills was the scene of a devastating genocide just six years ago. Between half a million to one million people were massacred and two million became refugees at a time when this country was considered one of the most Christian in Africa, 90% of the population called themselves either Roman Catholic or Protestant. 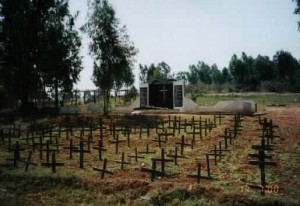 Over the next days I was to learn a little of the people’s historical struggles feel the great sadness of the past atrocities and yet see hope for the future in a vibrant land of song and dance. In Antoine Rutayisire’s book “Faith under Fire”, he gives a brief over view of Rwanda’s chequered history. Although Rwanda has three people groups, they all have the same culture, language and live together. History dictates that the Batwa, (hunters) occupied the land first, the Hutu’s, (agriculturists) came later, the Tutsi’s came last with cattle. In a famine-controlled country, the cow became currency and gave power to the Tutsi even though they were a much smaller percentage of the population.

In the 1959 revolution, Tutsi power came to an end in a five-year war causing a problem of refugees in neighbouring countries. This led to unsuccessful attempts to come back and reprisals on the Tutsi’s within the country, culminating in the 1972-3 massacres when people were this time massacred without any external attack. On 6th April 1994 President Habayarimana of Rwanda, a Hutu, was assassinated when his plane was shot down over Kigali, the capital. This sparked off the greatest genocide Rwanda has ever known.

In 1999 a friend Dave Bankhead was asked to help produce a record which brought together Hutu’s and Tutsi’s from all around the country having written songs of reconciliation and healing for the church. I was flying into the country with a film crew to help with the launch of the project in the football stadium in Kigali, where 5,000 people from different church backgrounds were coming together to celebrate unity. 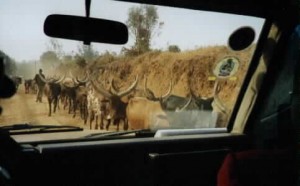 The newly paved roads from the airport soon changed to the meandering, pot-holed by-ways you come to expect in Africa. Due to the dry season ochre dust clouds followed every vehicle and permeated mud, brick and corrugated homes and awnings, giving even the luxuriant roadside foliage a bizarre colouring. Amazingly the Presbyterriene Eglise, a conference centre, which was to be home for the next week, was a haven with almost English in nature flowerbeds, situated on a hill overlooking part of the town. Electricity and sometimes hot water ….. luxury!

Rehearsals started the very next morning with people from many areas of the country forming a choir and musicians getting ready for the weekend event. It was during a break though that one of those magic moments happened. I had brought with me some African drums and percussion in order to put together a rhythm section for the event. As we chatted a couple of people started playing instruments, gradually a crowd gathered and as more and more instruments were picked up, rhythm and clapping filled the air. It was so spontaneous and built so quickly it took me by surprise. Suddenly one of the girls, arms up-right and making a hissing sound started dancing, more followed her lead and the intensity of the music moved to another level, the drummers encouraging the dancers in their movements. 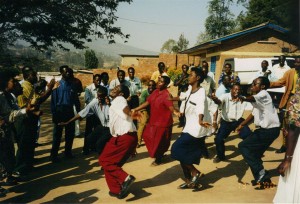 As dust swirled from the stone floor the men, grinning from ear to ear, arms and bodies gyrating and gesticulating in perfect harmony joined in, eventually taking over with the most amazing dancing/stomping that I have ever seen. Drums and feet in a percussive showdown, forcing you too passionately enter into their world. After 20 minutes the explosion of dance subsided and I was left exhausted, my heart thumping, stunned at having witnessed a passionate cultural expression. The intensity is impossible to explain, and as these moments re-appeared again and again, I realised what a privilege it was to be allowed a window into a world, I had never seen before.

The weeks practise culminated in making a video for Rwandan TV, a prayer breakfast for the government ministers and the event at the football stadium. Each event was a powerful demonstration of healing and reconciliation and many people were moved to tears. During these days I also realised that the dance was one thing that still spoke freedom in the Rwandan culture and on many occasions saw people released. At the breakfast ministers spontaneously joined in and at the stadium crowds rushed on to the pitch at the end to dance. 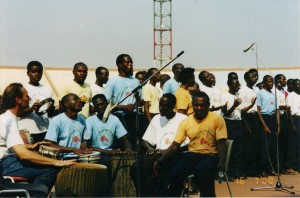 One light-hearted event whilst in a hotel brought another interesting sideline. Some of the singers and dancers had come from such remote parts of the country that they had never been in a hotel before and spent many hours amusing themselves going up and down in the lift.

These wonderful times were brought into perspective when I was taken to one of the many genocide sites, which have been left as a reminder to the sad days in the past. During the wars in the 70’s people had sought a safe haven in many churches, but during the troubles in 94, they used this knowledge to deliberately herd victims to their death. Ntarama church is one such place where 5000 people were slaughtered and has been left as a memorial to the dead. I was deeply shocked as a young lady whose family was killed at this site led us to a dilapidated building where the dank floor was covered with human remains and the smell of death still lingered in the air.

At another site, a brand new church had been built opposite the now boarded up church remnant. As we drove up a crowd of mainly orphans and widows were huddled around a tape machine (a noticeable lack of men) listening to a recording of the Bible. With a population of 8.3 million, Rwanda has 800,000 orphans who have now been distributed amongst the people, (after initial housing in orphanages), putting a huge strain on the family structure. 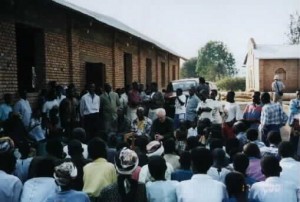 It amazed me that in the seemingly hopelessness of this struggling country, I found incredible stories of hope and revolutionary faith. Like the woman who prayed for her executors until she lost consciousness and lived to tell her story. A man who lost 64 out of 67 family members and pastors who still live and work amongst people who killed their neighbours and friends. Surely this is a touch of heaven on earth, where people forgive their murderers, the widows and orphans are cared for and feuding people groups come together in harmony.

And then they danced ……… 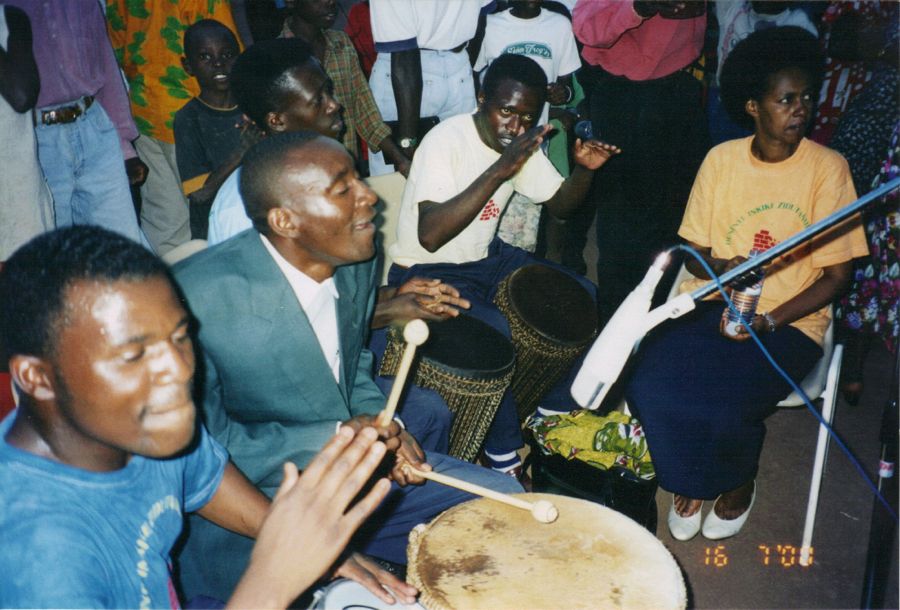